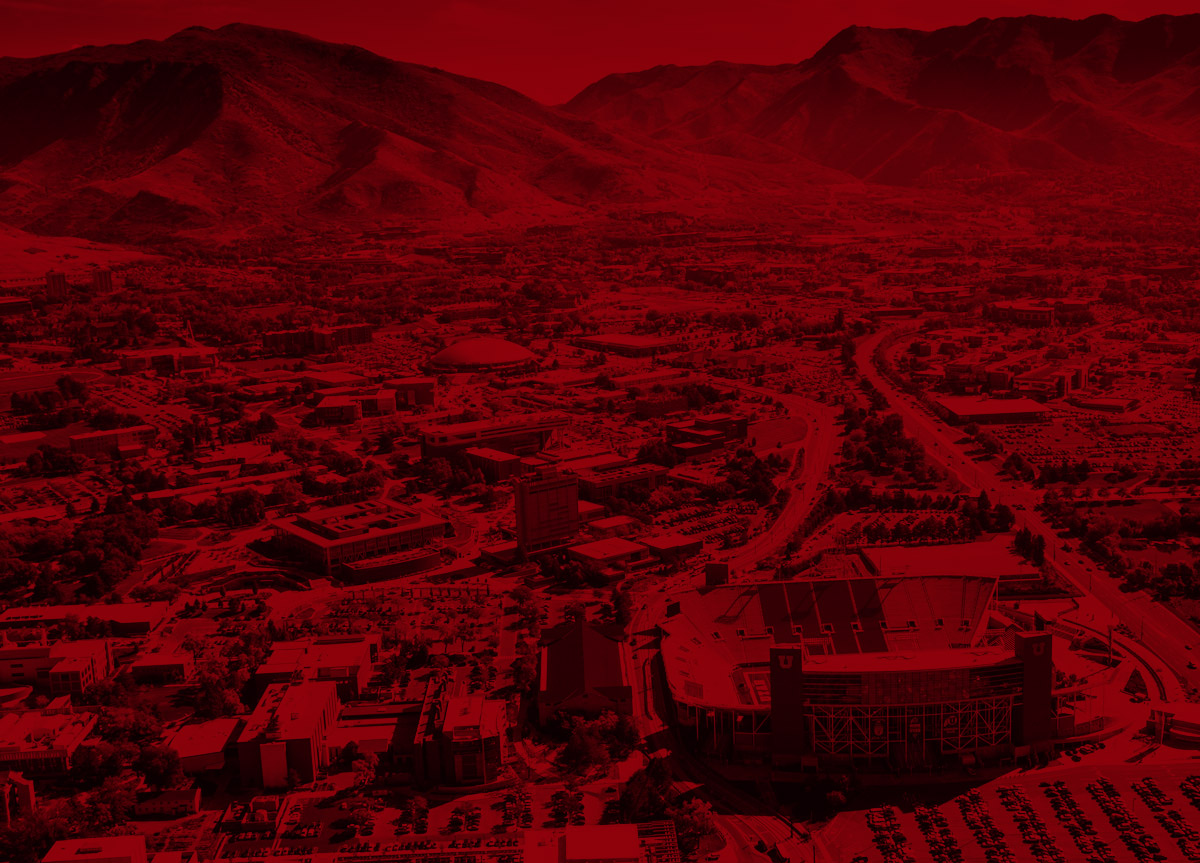 The latest chapter in Ute athletics history began on July 1, 2011, when Utah officially became a member of the Pac-12 Conference. But Utah’s reputation as an athletics power was established long before it joined the “Conference of Champions.”

The move to the Pac-12 has fueled some of Utah’s most successful seasons across a broad spectrum of sports in recent years. Skiing was crowned the NCAA Champion three of the last four years the event was staged in 2017, ‘19 and ‘21. Gymnastics has captured four Pac-12 Conference Championships as well as two regular-season league titles, and has advanced to four of the last seven NCAA finals. Football played in back-to-back Pac-12 Conference Championship games in 2018 and ‘19 after winning the South Division. Volleyball advanced to the NCAA regional semifinals for the second time in three years in 2019. In the fall of 2019, Utah had its highest ranking ever in the Learfield/IMG College Director’s Cup at No. 18.

Baseball captured the 2016 Pac-12 Conference title—the school’s first for a men’s sport since joining the league—and softball made back-to-back NCAA Super Regional appearances in 2016 and ’17. Soccer made the NCAA regional semifinals in 2016, while cross country made its third NCAA Championship appearance in five years in 2019. Men’s tennis advanced to the NCAA Tournament in 2018 and ‘19, and men’s golf qualified for NCAA Regionals in 2021.

Utah claims 28 team national championships and 112 individual national titles in its history, including 78 in skiing and 29 in women’s gymnastics.

Women's Gymnastics boasts 10 national championships and finished as the runner-up for the ninth time in 2015. Utah is the only school to qualify for all 39 NCAA Gymnastics Championships and has captured the most All-America awards. The Red Rocks also claimed the school’s first-ever Pac-12 Championship in 2014 and captured the postseason trophy again in ‘15, ‘17 and ‘21. Utah has captured the first two Pac-12 regular season titles in 2020 and ‘21. Utah holds every gymnastics attendance record, including highest single-meet attendance (16,019 in 2015) and highest season attendance average (15,273 in 2020). Utah has led the nation in gymnastics attendance 36 times and won its 10th all-women’s sports attendance title in 2019-20.

Women's Basketball has averaged more than 20 wins a season since its start back in 1974-75 and ranks in the NCAA top 25 in all-time winning percentage (.665). The Ute women have received 17 NCAA Tournament invites since 1982, advancing to the Sweet 16 twice and the Elite Eight in 2006. They have won 22 conference championships.

The Men's and Women's Ski Team has captured 13 NCAA Championships and 14 national titles all time, the last coming in 2021. Volleyball has participated in 17 of the last 23 NCAA Tournaments with four Sweet 16 finishes. Softball has qualified for the postseason 21 times (16 NCAA Regionals, 2 Super Regionals) and has five College World Series appearances (four NCAA). Women's Soccer has played in the NCAA Tournament eight times since 2002. Baseball has advanced to NCAA Regionals twice since 2009, the last coming during its Pac-12 championship season in 2016. 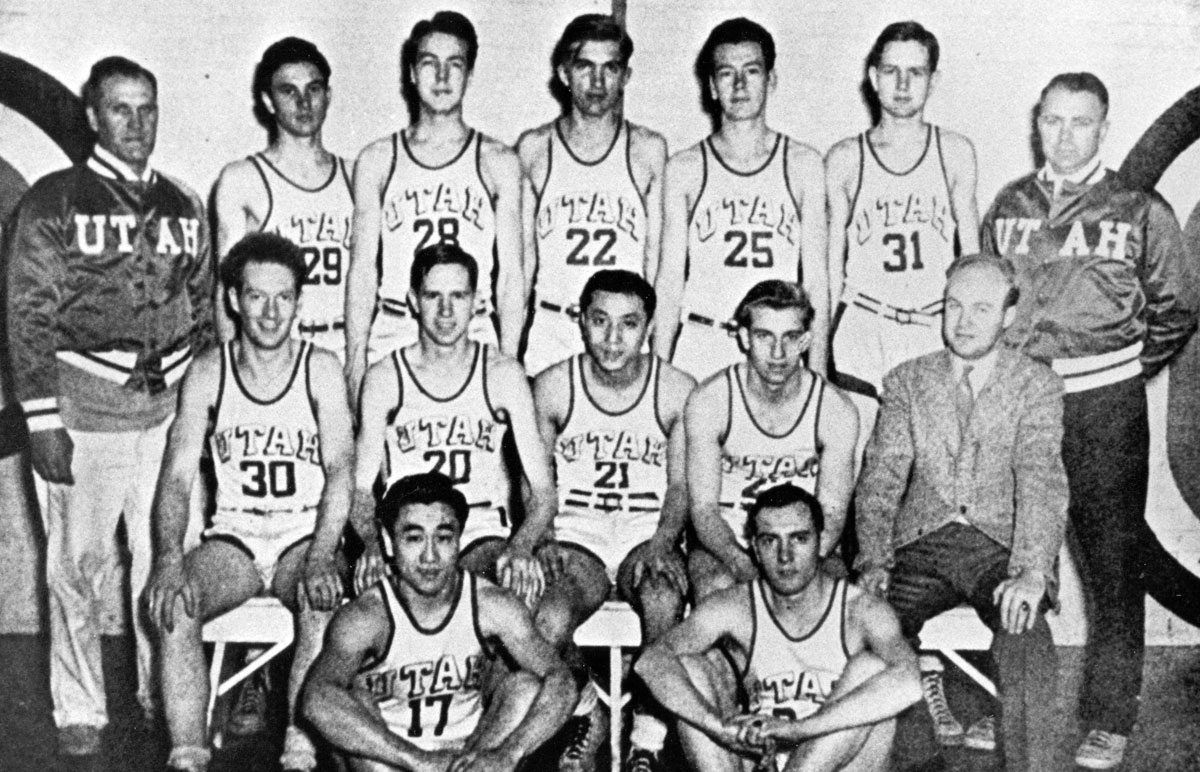 Utah men's basketball won the 1944 NCAA Championship. Arnie Ferrin (#22 top middle) was the first freshman to be named MVP of the Final Four. 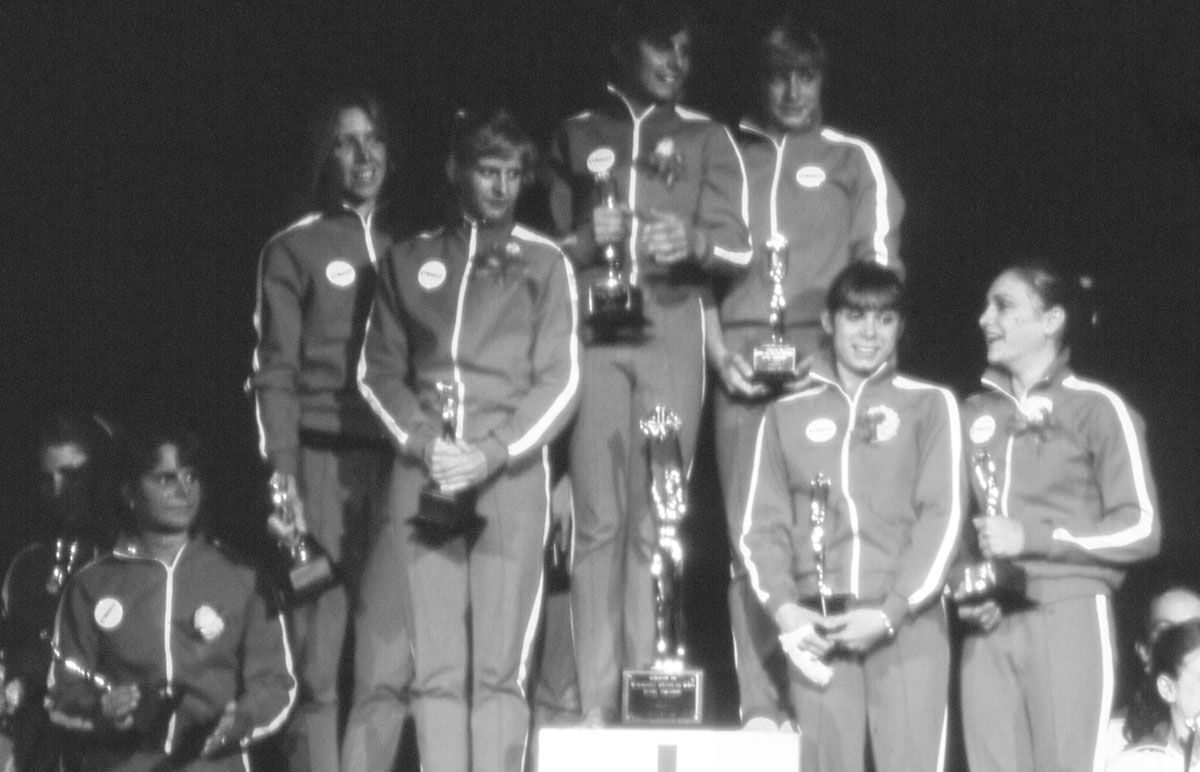 Utah gymnastics claimed the first of its 10 national titles by winning the 1981 AIAW Championship. The Utes have also won nine NCAA Championships. 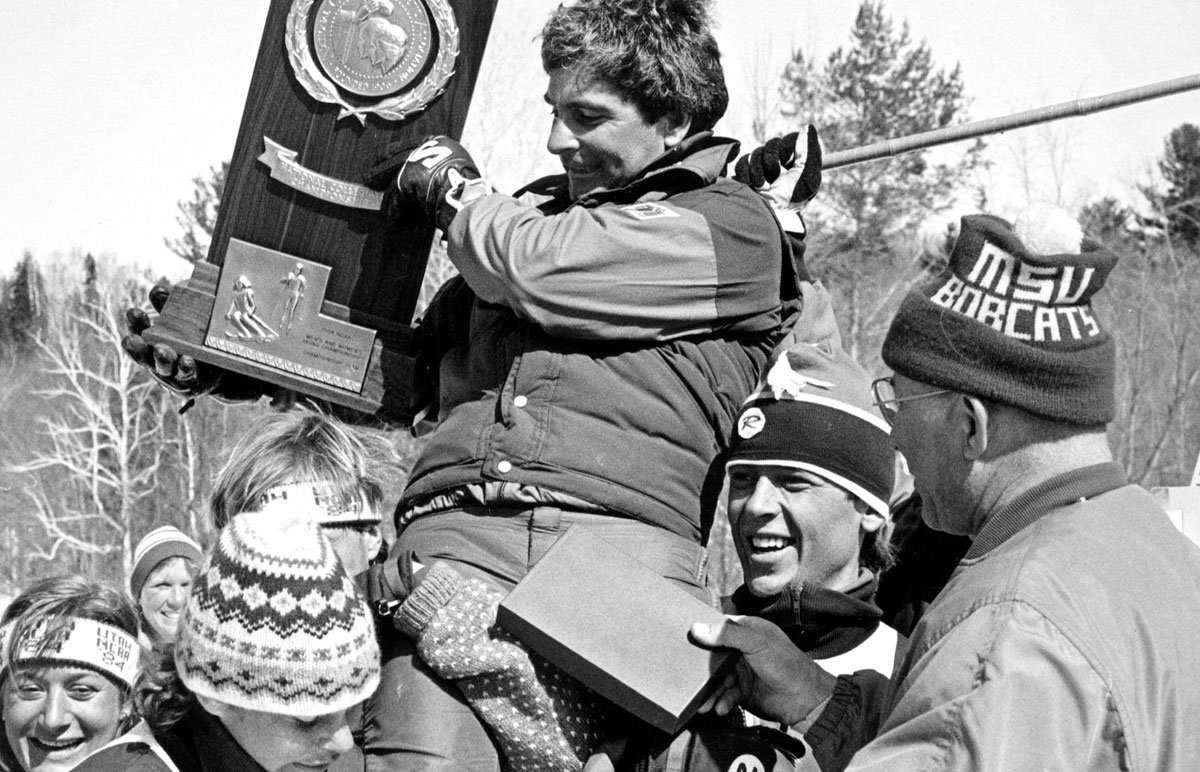 Utah won the second of its back-to-back NCAA Championships in 1984. 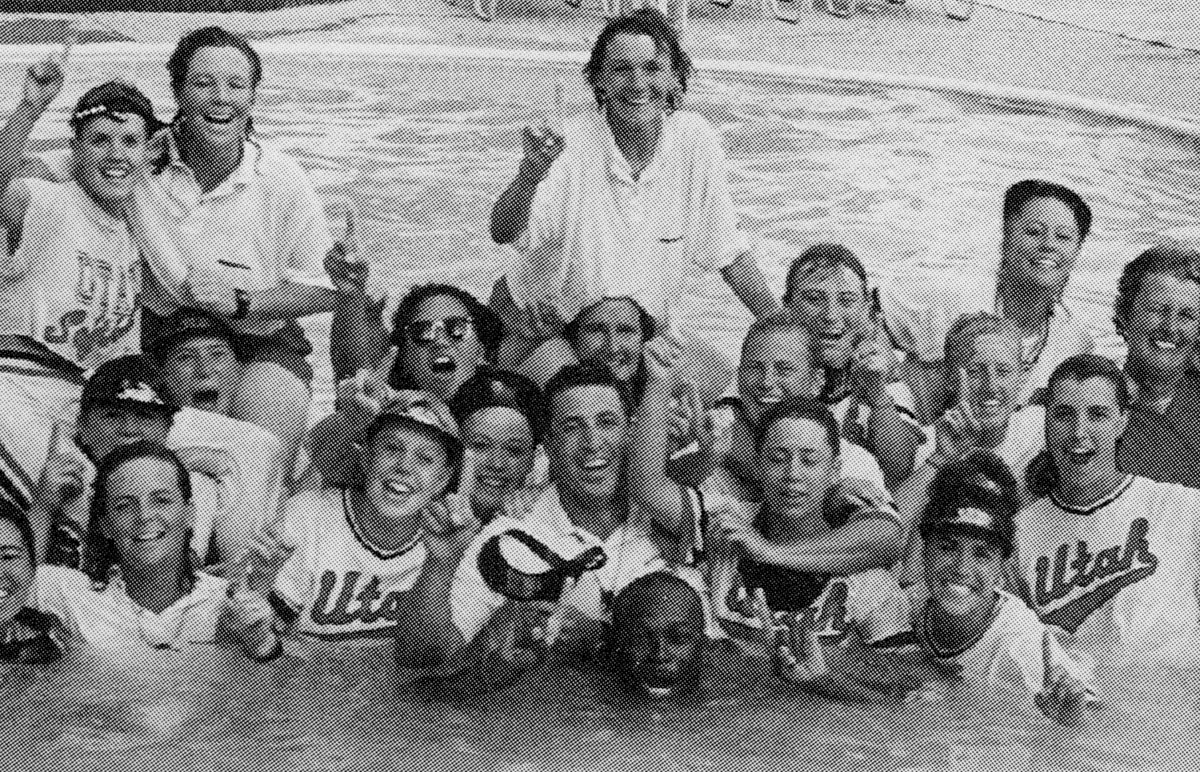 Utah made the second of their two NCAA College World Series trips under Jo Evans (top, second from left) in 1994. 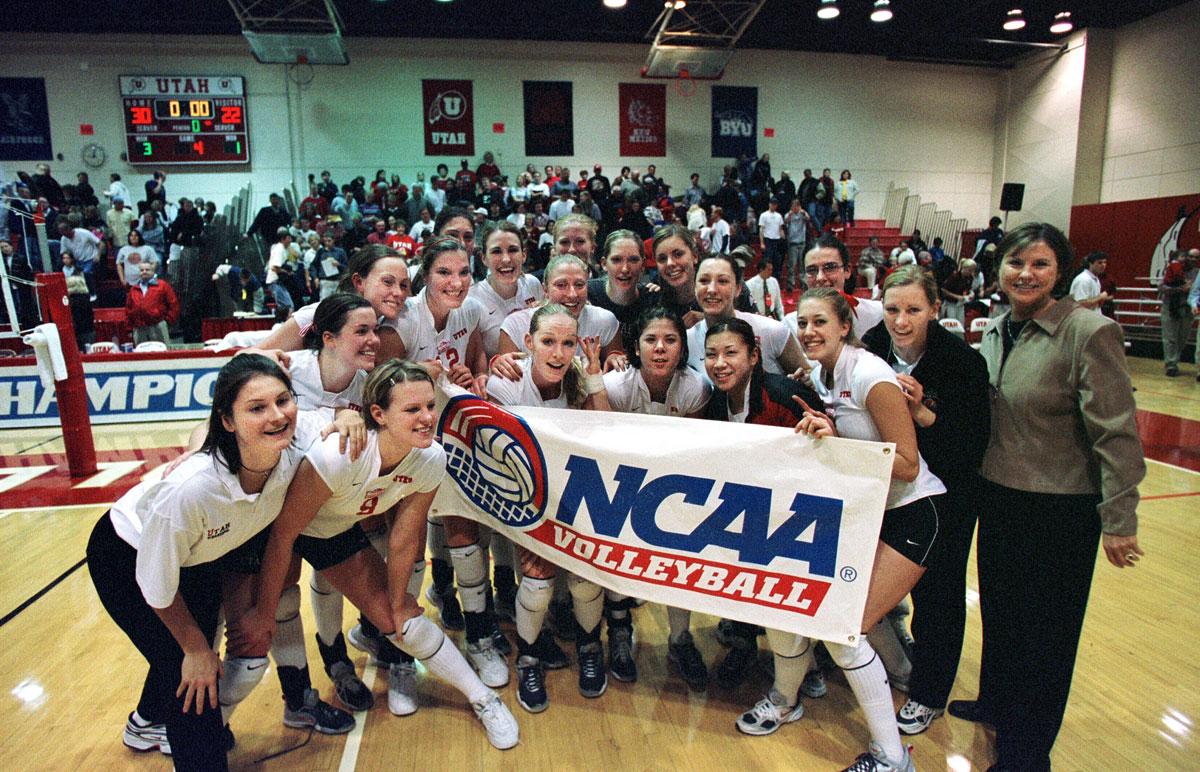 Utah volleyball made the first of its four NCAA Sweet 16 appearances in 2001. Beth Launiere (second row, right) has led the Utes to 600 wins and 17 NCAA Tournaments. 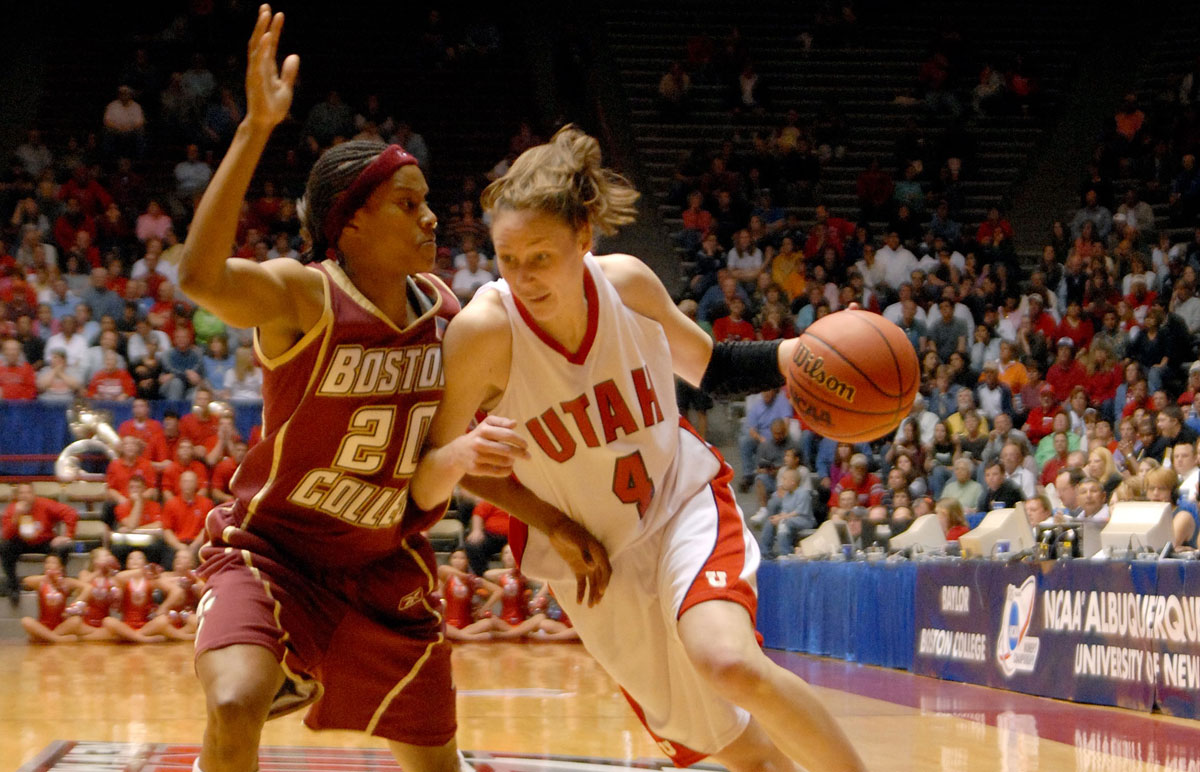 Kim Smith, Utah's all-time leading scorer and a third-team AP All-American as a senior, led the Utes to their first-ever NCAA Elite Eight in 2006 with a win over Boston College in the Sweet 16. 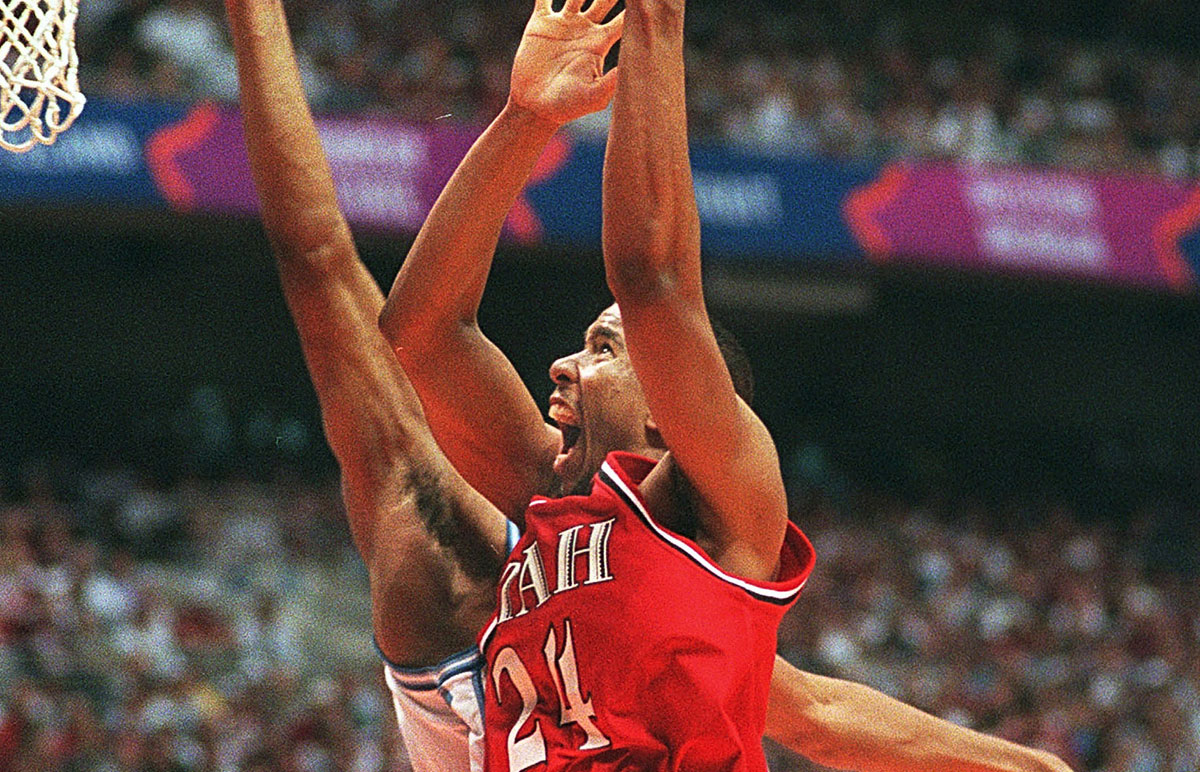 Utah advanced to its first NCAA Final Four in 22 years in 1998. Led by All-America point guard Andrew Miller, the Utes took down defending national champion Arizona in the West Regional final before defeating No. 1-ranked North Carolina in the national semifinals. 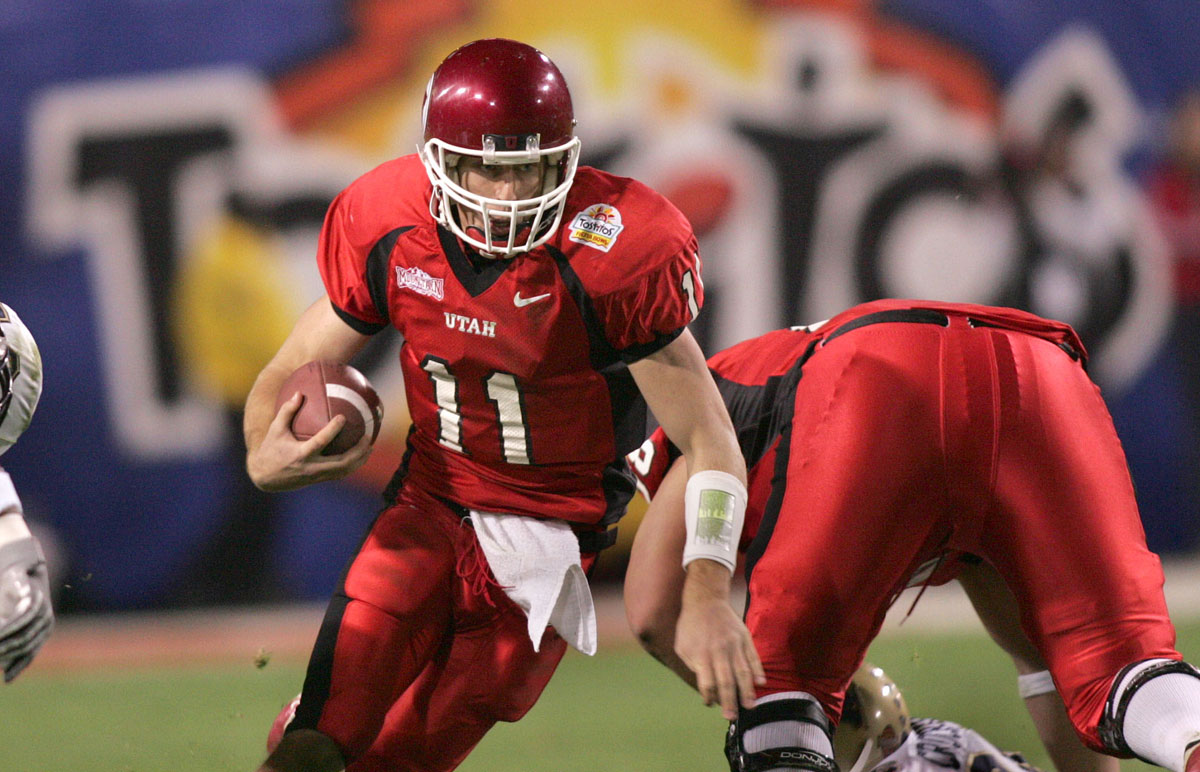 Utah became the inaugural "BCS Buster" in 2004 by becoming the first team from a non-automatic conference to earn a BCS Bowl bid. The Utes completed a 12-0 season with a 35-7 win over Pittsburgh in the 2005 Fiesta Bowl. 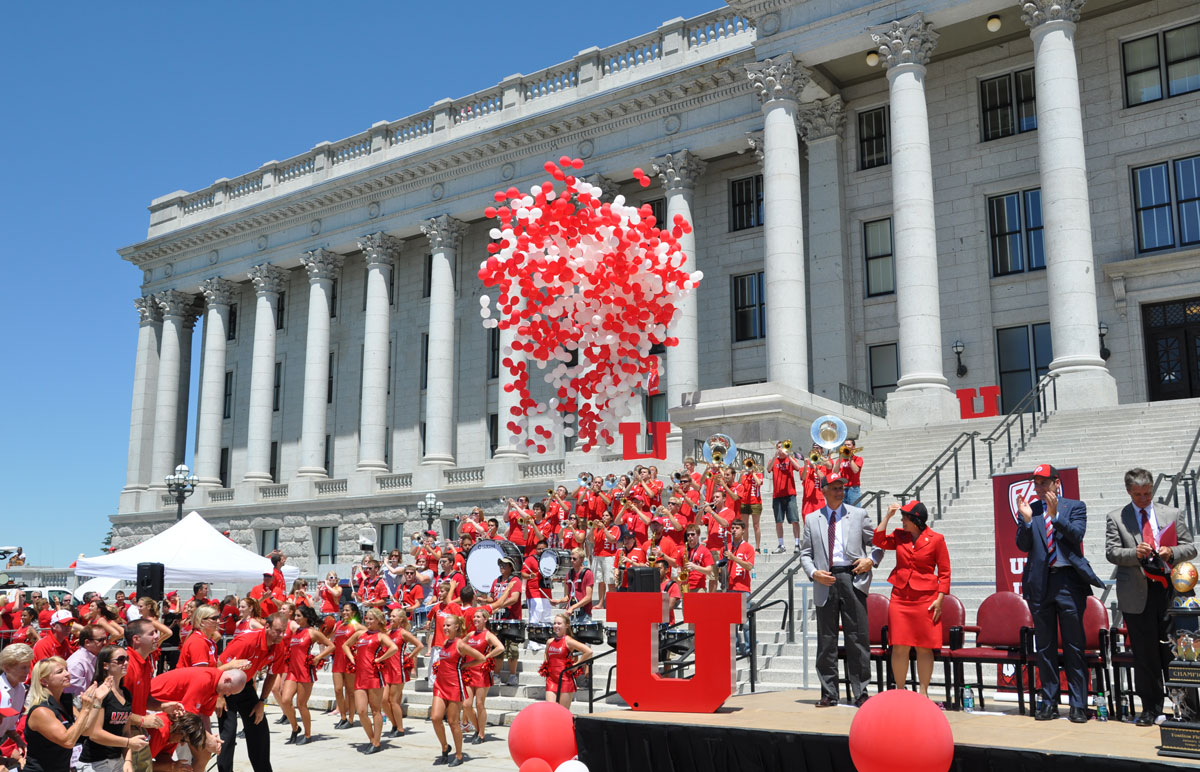 It was declared Pac-12 Day in the state of Utah on July 1, 2011 as the Utes officially became members of the Pac-12 Conference. 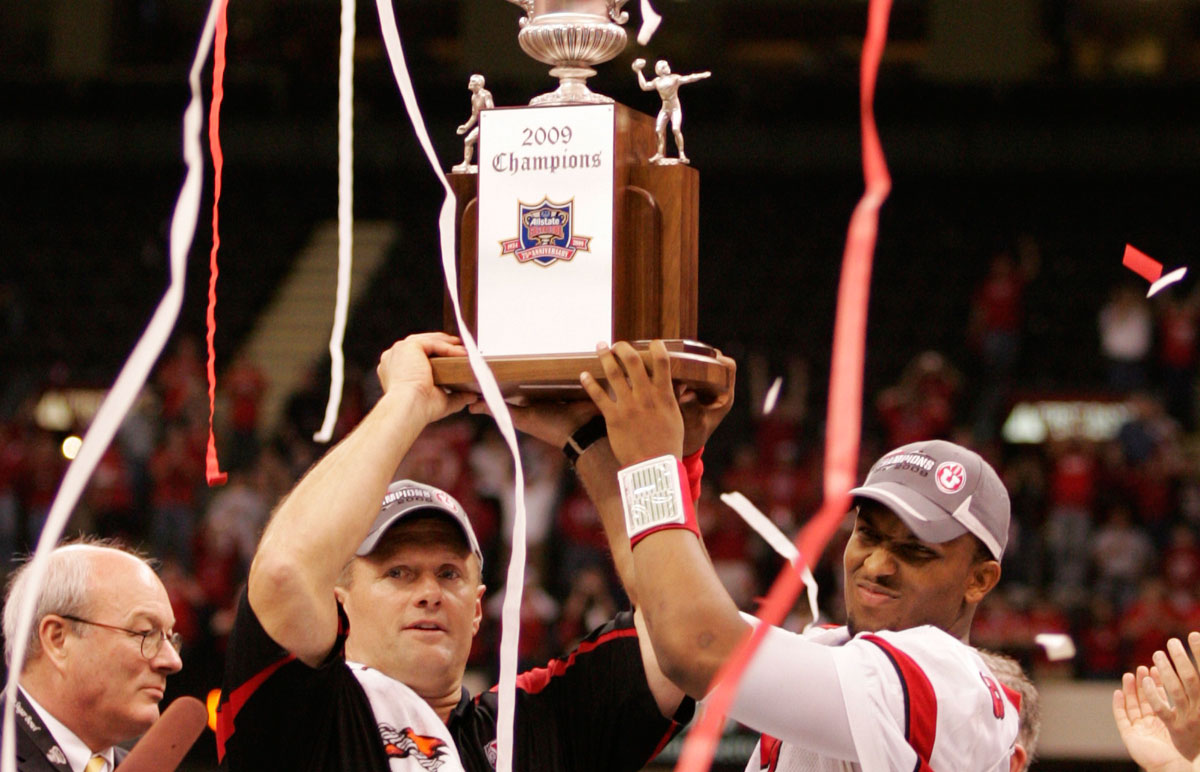 Utah won its second BCS Bowl in five years by taking down Alabama, a team that had been ranked No. 1 in the nation for five weeks, 31-17 in the 2009 Sugar Bowl. Head coach Kyle Whittingham (left) directed Utah to the best season in school history with a 13-0 record and a No. 2 ranking in the final AP Poll. 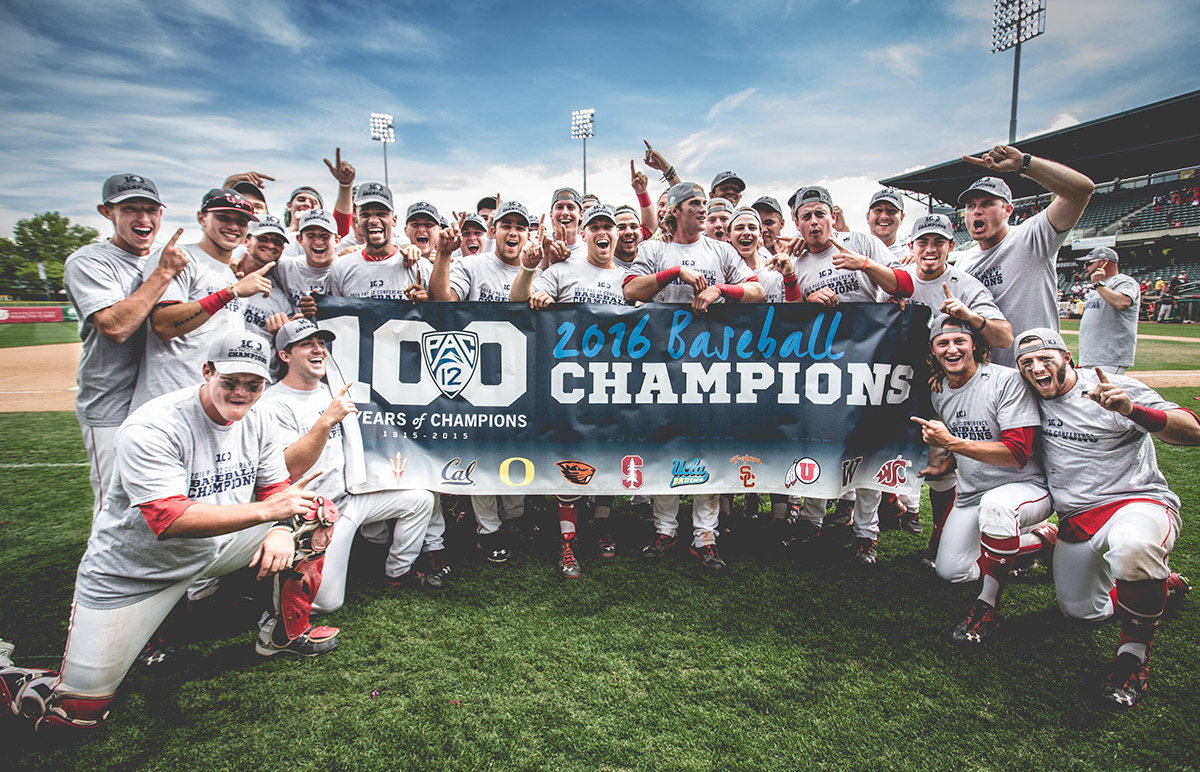 Utah baseball won the school's first Pac-12 Championship in a men's sport in 2016. 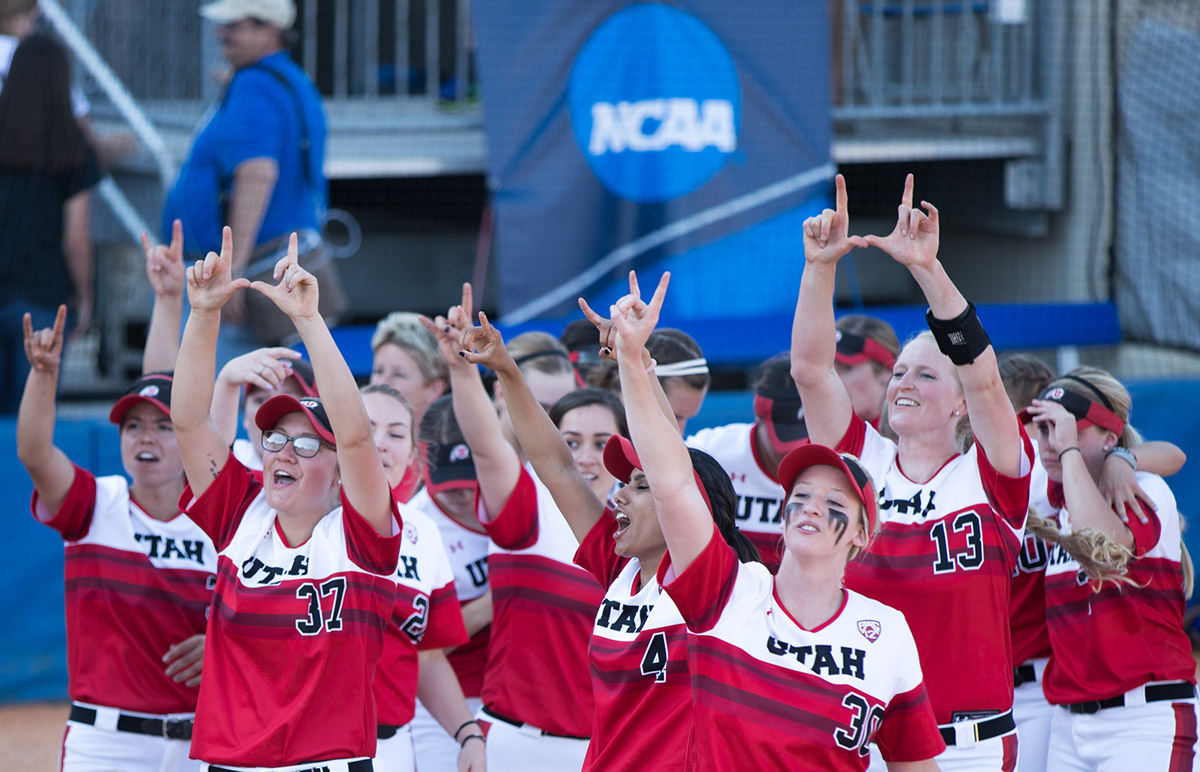 Ute softball made the first of its back-to-back NCAA Super Regional appearances in 2016. 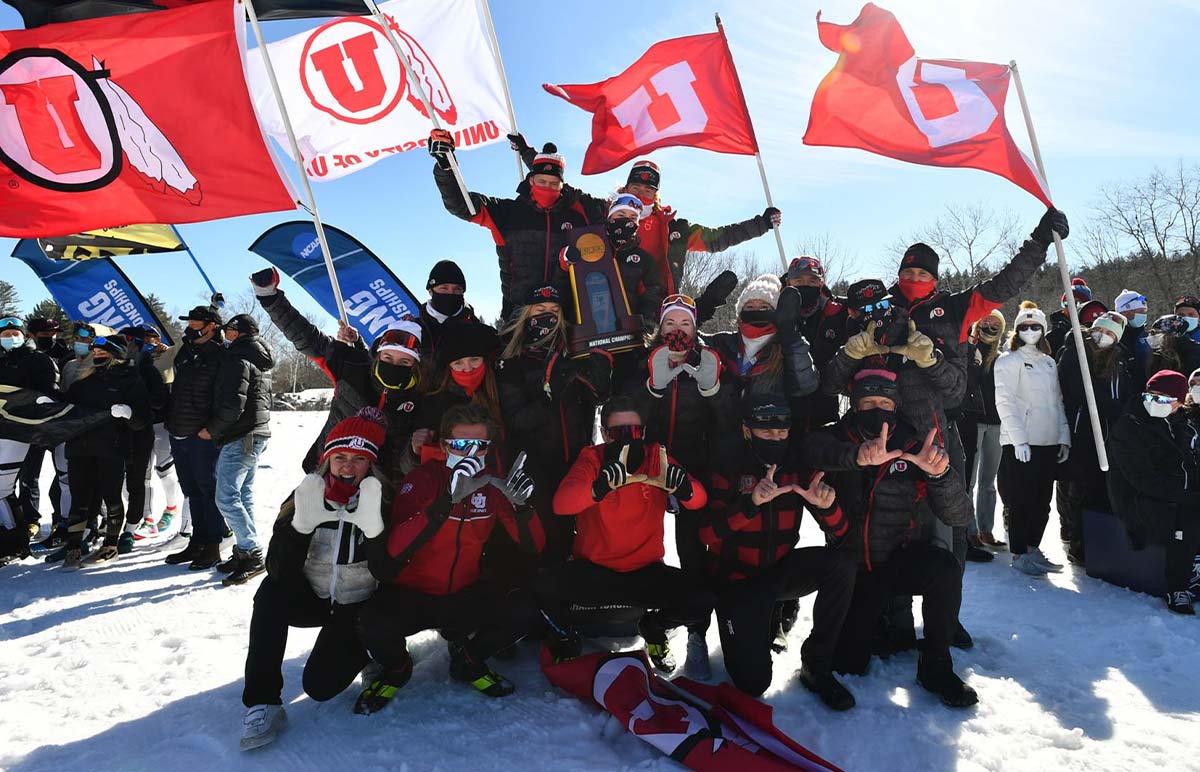 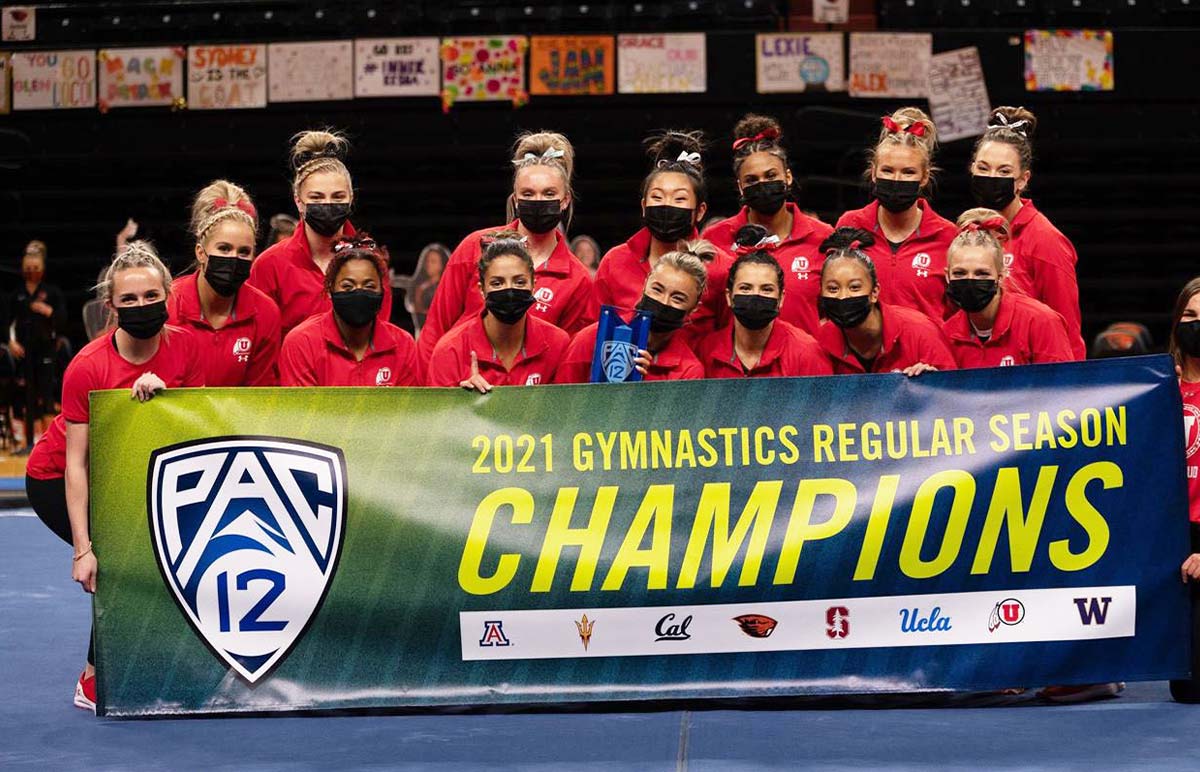 Success in The Conference Of Champions

Since moving to the Pac-12 Conference in 2011, Utah has captured three division titles in football, the 2016 baseball championship, two regular season and four postseason women’s gymnastics titles. Men’s basketball was the regular-season runner-up twice and played in the Pac-12 Conference title game in 2016. 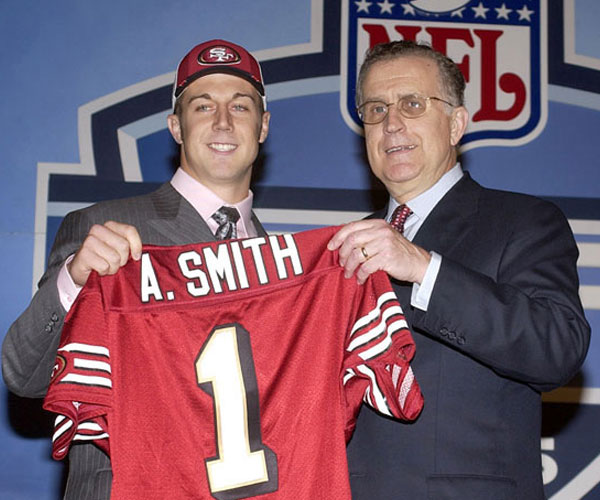 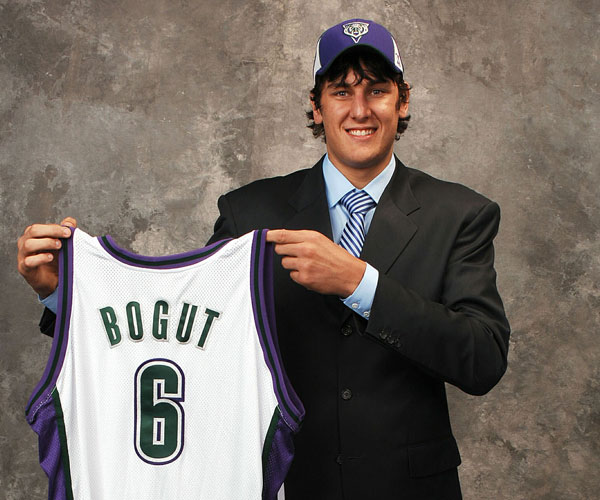 Utah made NCAA history in 2004-05 when it became the only school ever to produce a No. 1 NFL and NBA draft pick in the same year. Quarterback Alex Smith was taken by the San Francisco 49ers and center Andrew Bogut went to the Milwaukee Bucks.